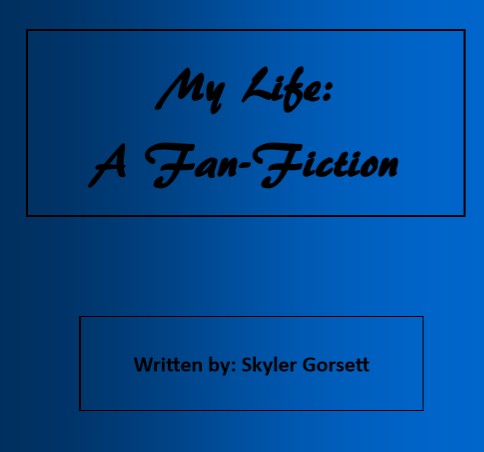 It’s probably a sad point when someone creates a fan-fiction about their own life; that or else I’m really stuck up and I’m just trying to make my life out in a fantasy setting to make it seem even cooler than it already is and then come across as a massive fan of myself (a Kanye West if you will), thankfully that’s not the way I see it. Honestly, being in college and participating in this whole ‘growing up’ phenomenon, I always find myself looking back to, and I know I’m still probably too young to say this but, the ‘good old days’ back in high school when things were simpler and that hanging out with friends and enjoying life and just making sure you had tomorrow’s assignments done so you could play some video games. That’s the reason for this and maybe it’s weird but that’s ok I think it’s a great way to relive the past without dwelling on it and not being able to move on with my current life.

Also it enacts as a way to get my creativity out, I’ll warn you now this is going to be a fiction with an episodic feel to it. Almost every chapter is going to feature a new setting, some may have carry-over’s who knows (I sure don’t) but we’ll figure it out together. As it is a fanfiction of my real-life I’m going to use a lot of characters that actually exist; I’m hoping that doesn’t present any issues we’ll see. Anyways I hope you all can enjoy.

It’s been our plan for a long time, to own our own place, but being five guys just our of college (or in Ben’s case the army) we didn’t know it would be possible, of course it was way better than living at our parents’ place. It wasn’t huge but it had two rooms with two of us to a room and Caleb more than happy to sleep on the futon in the living room (since that’s where our only TV is). All in all it was nice, and with our recent living conditions (dorms and tents or whatever army guys sleep in) we were all pretty used to it. There’s an open-faced kitchen, in the corner, connecting directly to the living room with a small circular table encircled by a set of three basic wooden dining chairs that were so uncomfortable that they were primarily used for reaching up above the cabinet in the kitchen to steal the brownies and other store-bought baked goods Quinn attempted to hide up there. Our living room featured a massive 40-inch flat screen TV, a futon, and two padded rocking chairs one black and the other velvet red (don’t ask where we got that) and to we bachelors they were the second most comfortable things on the planet after our beds.

As for the bedrooms they were a little small, small for two young men to each of them that is. I shared with Ben while Quinn and Michael constantly fought over space for the other. Both rooms were almost identical: the walls were the same color, the layout of dressers and beds were the same, even the walls were covered in movie and television show posters framed to perfection thanks to my and Michael’s digital obsessions. The beds were bunked so as to save space, space that was used for dirty clothing that was scattered across the floor, for some reason I was the only one who thought that a clothes basket was a good investment. Yes it was a small place but to quote a cliché line: “it was ours.”

Of course to afford “our place” we each made a deal to pay a piece of the rent and thus we each had jobs. Caleb worked at a local pizza place as a delivery guy and was our primary source of food. Almost every night he’d bring back the “reject” pizzas and breadsticks from that night, in fact we made some money on the side by selling whatever we didn’t end up eating to kids in the building next door: $1 a slice or $7 a box (if we had it) making us kind of feel like drug dealers, but the money went to a good cause and by good cause I meant our grocery funds for food other than pizzas.

Quinn actually worked two jobs one at a video game joint as an assistant manager which gave us all great discounts since we all ranged from casual gamers (Ben, Michael, and I) to hardcore (Quinn and Caleb) and over various different platforms. He would regularly come home with the newest game he got to test and we would regularly stay up all night and into the morning trying to beat it. On the side though Quinn also worked at a fast food joint; the money he made there he used to pay for the culinary classes he took online, he was a good cook and bridged on great; whenever we weren’t eating pizza we would go to the grocery store with a list made by the cook himself and he would whip it up into something delicious the second we got back.

Michael is an entrepreneur who created his own online workout company. He sells his own formula of protein which wasn’t insanely successful but it sold and that’s what mattered. He also ran two blogs: one a workout blog that went hand in hand with his brand of protein that had a decent following, and the other an entertainment review blog that he was still working on but seemed to be going well.

Ben, with his military background and infinite knowledge of guns actually landed him a partnership with an ex-cop friend of his owning a small time gun shop selling armaments from pistols, to shotguns, to rifles and even some specialty weapons (all legal of course and if they were lucky enough to get them in stock) called The Gunner (not the most creative name but that’s what they went with). For the longest time I have been trying to convince him to carry swords and other melee weapons in his store but he always tells me the most “melee” thing he plans to carry for a while are Tasers and pepper spray.

Myself? I used to work at a grocery store but I wasn’t making enough money (and they didn’t even offer a discount to employees) so there wasn’t much reason to continue there. I worked creating websites for various small businesses (including Michael’s workout sites) and occasional freelance media work such as photography, videography, etc. usually for private owners (weddings, special events, stuff like that).

Anyways that was our lives, going to work every week day and chilling-out on the weekends. Things were going well for us, until we realized we were all a part of someone’s elaborate fan-fiction and our lives changed forever.