So you want to create visual stories? It’s a defining attribute of humankind to want to tell stories this is why we have social media, a direct link to the entire world; but making a visual story isn’t quite as easy as just pulling out a camera and waiting for one of those crazy accidents to happen like on America’s Funniest Home Videos, one must prepare to tell a story especially if they are going to do it with video.

How can one make a video without having something to record it on. Getting a camera can be easy, but getting the RIGHT camera is a little more…expensive. One could get any cheap $20-$100 camera from Wal-Mart but that’s not going to get you very good quality. What you’ll probably want to go with is a DSLR camera which you can get at almost any store and definitely at an electronics store like Best Buy. These cameras are reasonable priced at about $300+ but you can always get one used. One thing to note though is that not all DSLR cameras have video capabilities, so make sure you check before you buy. One of the great things about DSLR cameras, aside from being cheaper than a compact high-end video camcorder, is that you can do a lot as far as lenses go. With the ability to interchange between lenses you increase your quality and allow you to add depth of field to your shots. I suggest a 50mm lens for great depth of field.

If you’re really short on cash that’s ok you can still tell your story. use your phone or tablet (if they have cameras) or even a webcam, these will still let you tell a story but don’t expect the quality to be great.

Obviously you can’t make a story if you have no story. Come up with a concept, a theme if you will. Great ways to brainstorm ideas is to start off with a genre. There are many genres: Action, Horror, Adventure, Romance, etc and you don’t have to stop with just one. Also, look around you at the areas you have available for you to film at. When I was just starting out in high school I filmed a lot at a good friend of mine’s house. So take that setting and decide what you can do with that. If it’s night time and you’re stuck inside maybe make a horror video. Whatever the case is get creative and be original!

Also, if you’re not too short for time create a script and a breakdown, and maybe even a shot list or screenplay. A script is the written out form of what you want your actors to say. This helps them to be prepared and it helps you, the producer/director, to have the story planned out so you’re not flying entirely by the seat of your pants. If you DO want to write a script use Word or Pages (depending if you’re a Mac or PC kind of person). Or go online and use Adobe Story which is a great way to write your script and make it look professional as well.

A breakdown shows all the aspects of your production as far as the where you’ll be filming and what you’ll need. This includes actors, costumes, locations, props, etc. Anything you will need for whatever scene is important to know ahead of time. Along with these you might want a shot list, which simply tells you what kind of camera angels, pans, zooms, etc you will be wanting for each scene. Get as detailed as you are comfortable with. If you aren’t intensely comfortable with terms and words for a shot list you can instead make a storyboard that illustrates your shots. Hey, you don’t have to be really artistic either so long as you can draw stick figures you’ll do just fine.

3. Get Together Other Equipment

Maybe you want to do fancy pans, make you want to do dolly shots or jib shots, whatever the case you will need a tripod at the least. You can probably get a decent tripod for $10 or so at Wal-Mart (Note: this will be a very cheap tripod so be careful with it because it will break easily). What you want to do though is simply keep your shots in mind and prepare accordingly. If you’re short on money (probably from buying the camera) but you still want some cool Jib or Dolly shots (Both Jibs and Dolly rigs are incredibly expensive by the way) there are ways to either substitute (use a wagon instead of a dolly) or even build your own. If you go to YouTube you can always find some great DIY tutorials to build your own film equipment such as: Film Riot or Indie Mogul.

Our film professor at the college I’m attending once told me that actors will always be one of the hardest parts of making your video, and he was right. Finding people willing to act in your videos and then getting them to actually show up and take part is one of the hardest things in filmmaking, especially when you’re just beginning. Try getting everything else planned out first then plan a day when you need your actors to show up that way you have everything set and ready to go. If you’re using your friends that’s great, but one thing to remember is that people are easily bored so make sure you’re not taking their time to set up etc. This will lead to them becoming uninterested and want to leave.

So now you have all your equipment, your script, your actors and you’re ready to start filming. Hold on a second though, there are some things you want to keep in mind.

You can have a great story and good actors, but when it all comes down to it if you can’t please the audience it won’t matter for squat. Make sure you have some kind of lighting in your video especially if it’s dark where you’re filming. Lighting can set moods and help in telling the story and making the audience feel a connection to the situation. Use lamps, flashlights, etc to add lighting to your scene and add mood. 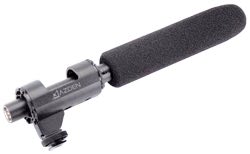 If you went with my earlier suggestion and are using a DSLR camera, audio shouldn’t be too difficult. One can buy a shotgun mic or even a shoe mic online for around $20 which will greatly improve the quality of your audio. You can also buy lavaliere microphones and attach them to some kind of audio recorder or even one’s phone, then syncing it up later in the editing process.

Alright so you’ve done it, you’ve gotten through the filming of your story. Congratulations that was the hard part, now on to the part that can be a bit tedious: editing. There are a lot of options when it comes to video editing software that all depend on what you’re used to or what you can afford.

The most inexpensive video editing software are Windows Movie Maker or iMovie because they are free on your Windows or Mac. These will let you put your videos into a timeline and splice up the clips and move them around as needed. You won’t have a whole lot to do in the effects department, you should be able to do a little color correction but other than that you’re pretty limited.

If you’re looking to do some simple effects you might want to look into going a little higher end with programs like Adobe Premiere Elements or Pro. These will allow you to do some green screening and keying as well as stronger color correction. The kinds of programs will range from $50-$100 depending on where you get them, but are worth the cash if you’re looking to make your final product a little better.

If you are really comfortable around editing or want to start learning early you might want to go with programs like Adobe After Effects, Final Cut Pro, etc which will allow you more freedom in effects. These programs will give your videos a much higher quality look (remember though that nothing can fix bad camera work) if done right.

One of the beautiful things about the technology of our time is social media, letting us share our thoughts and other content with people from all around the world. With film and videos this is a great asset to sharing your visual story, YouTube especially. Making it simple to upload your content YouTube is definetely the place you want to go to post your video, and hey maybe it goes viral and you can make some money off of it as well. Also are blogs and your social media such as Facebook.

You’ve succesfully created your video and now you can share your story visually to the entire world. Making a video can be a complicated process but bottom-line it can also be fun if you keep it that way. So have fun and share your stories with the world!